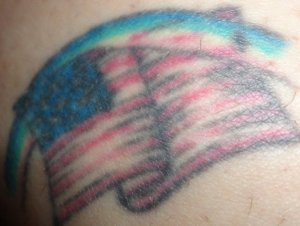 My daughter asked me what today’s date is, and as I glanced at my calendar and told her, the date slapped me across my consciousness. September 11. Wow. So much significance in that date, and yet, this year for the first time, it caught me off my guard.

13 years ago, when our country was attacked by terrorists who have declared a holy war against our nation, I was out of the US. I watched the entire thing unfold, as plane after plane hit, from a long distance, over the news. I did the only thing I could think of doing: logged in to the chat rooms over Yahoo, to see if anyone online was needing someone to talk with, to prayer with or for them, to just be there to keep them from feeling alone. It was shocking to see the chatrooms almost empty. Even the mockers of Christianity were silent, absent from their self-appointed posts.

I waited around online, and eventually someone logged on. They didn’t know about the planes, the fallen towers, the heroes and the many missing and dead. I don’t think they believed me when I told them. Until they turned on the news. Then, they logged out.

For one day time online seemed to stand still. The busyness of the primitive versions of our now sophisticated social media was abandoned, forgotten. I doubt social media will ever again see such abandon and neglect. I prayed for 2 or 3 people on that day (it was night for me). I don’t remember the prayers, or the names/id’s of the people. But, I remember being grateful that I was able to just do something to help anyone. I felt so helpless, being so far away. I cried and prayed a lot that night, all by myself.

I still cry on September 11.

Yet, this year, I didn’t remember to think about the day as the anniversary approached. I let myself get caught up in daily cares and life.

I just didn’t pay attention. I didn’t prepare myself for the flood of memories.

I’m letting the memories start to slip away.

9/11 2012 was another reminder of murderous hatred towards our nation. People died. Regardless of political beliefs and whatnot, no one can dispute that our Ambassador did not deserve to die. So horribly.

The men protecting him did not deserve to die and be abandoned by their own country’s leadership.

I forgot to remind myself to remember.

I can’t let myself forget to remember, again. Those people did not just die in vain. They do not deserve to be forgotten. My daily life is not more important than the death they experienced in service for my country and essentially my protection.

They deserve to be remembered by name.

Finding and sharing moments of peace.

Meditations on Art and Life

The Shift is hitting the fan!