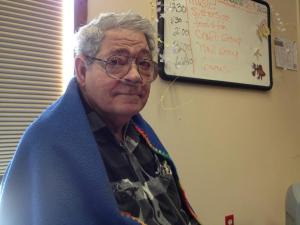 Well, what can I say about my dad? Where do I start? I guess I will introduce him to you.

He is James Roy Bennett Jr. He is the oldest of 3 children, the only boy, and both his parents have passed away. He’s a musician (plays/played the guitar, sings, and wrote his own songs, including one for me called Jami Michelle). He’s a disabled Vietnam era Veteran. He grew up under tough circumstances, in a tough house. Worse than many, but not as bad as it could have been.

I know 4 sides to my dad. The first side is tender. I remember him singing the song he wrote for me when I was very young, probably about 3. I don’t have many memories before the age of 10, but time, and God I believe, have been kind to me and allowed me to remember some good things that my heart holds valuable.

The second side is angry. While I was growing up, my dad faced so many obstacles, both because of his disability and lack from his own childhood. He didn’t handle things well, and for that reason I hated him for a very long time. He made choices that hurt me, and he was unapproachable.

The 3rd side is hilarious. He told the funniest jokes and usually had us laughing wildly on road trips. We played 20 questions for hours, sang “Jingle Bells” as he beeped it on the car horn through tunnels, and giggled insanely at his playing on words. He could also be crude and inappropriate, which made me so uncomfortable, but the fun stuff made all the traveling worth it.

The 4th side is vulnerable. I have seen my dad at his weakest, and because I was able to forgive him, that caused me to feel protective towards him. I’ve seen him in grave condition with a ventilator helping him stay alive, much like I’m sure he is now. He thumbed his nose at death then. I’m not sure he’ll do that this time.

Listening to others talk about their relationship with their dad has always made me feel cheated and even jealous. I wish I had my dad encouraging me, cheering for me, and playfully interacting with his grandchildren. We have all been robbed. He’s lived in nursing homes and hospital care since 2003. Military life has kept us at quite a physical distance from him while our relationship has kept us at an emotional one. My kids know the fun things about their Grandpa Jim, and a little about his strictness. They don’t know the man I grew up fearing and hating. My daughter has her own tender memories of my dad from when she was 3, but none of the fearful ones I have purposefully shielded her from. I see no purpose is telling his grandchildren the negative things, I won’t pass on my burdens about him to them. They deserve fun, happy memories.

I said my good-byes and made peace in my heart as we traveled back from Okinawa in 2009, not knowing if he would have passed on or clung to life by the time we landed. It’s been in the back of my mind that he will die at some point. So, it surprises me that I am having such a tough time dealing with it now. It surprises me that my heart is broken that he will probably never meet his youngest grandson and get to see his smile light up the room, or get to hear his crazy laughter. My boys won’t have the fun memories that our daughter has, won’t hear his silliness about things like driving over painted warnings, him yelling, “Watch out! A head!”

The “best” of my dad will be passed on as the condensed version, instead of experienced by them firsthand, while the worst will remain in the past, not known by them at all. I think that envelopes the meaning of “honoring your parents in the Lord“.  God didn’t add, “if you think they deserve it” to that commandment.